SAFC Bragging Rights – Every Black Cats Victory Over The Magpies

If any one game captures the drama and passion that makes English football great, then it’s the Tyne-Wear derby. Each season, regardless of the respective clubs’ standing in the league, it is the one fixture that both sets of supporters are desperate to win and claim North East football’s ‘Bragging Rights’. Over the years there have been numerous classic matches which have produced brilliant football, great goals and no small degree of controversy and this book tells the story of each of Sunderland’s 51 victories, from the club’s very first league success in 1899 right through to the recent record-breaking ‘Six in a Row’. Wonderfully illustrated and packed with fascinating information, it includes match reports from every one of those games, together with anecdotes from the players and managers involved, which are bound to rekindle so many great memories for Sunderland fans both young and old. 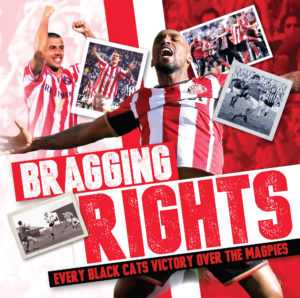