Liverpool FC … The Best of

Newly crowned Premier League champions Liverpool FC are one of the most successful clubs in the world having won more European trophies than any other English team with six European Cups, three UEFA cups and four Super Cups. The club has also won 19 league titles, seven FA Cups and a record eight League Cups.

But the trophies tell only half the story. The club has arguably the most passionate fans in the world and their anthem “You’ll Never Walk Alone” has helped carry the team through the good times and the bad particularly following the 1989 Hillsborough disaster when 96 supporters were crushed to death. Founded in 1892, the club has played at Anfield in all that time, and enjoyed its most successful period in the 1970s and 1980s when Bill Shankly and Bob Paisley led the club to eleven league titles and seven European trophies.This fully-illustrated full-colour book gives an A to Z listing of all the greatest moments that have shaped the history of the Merseyside club and pays tribute to the great players from the past such as Kevin Keegan, Ian Rush, Kenny Dalglish and Steven Gerrard to the modern superstars including Virgil Van Dijk, Roberto Firmino, Sadio Mane, Mo Salah and captain Jordan Henderson who are on their way to becoming legends under the charismatic managership of Jurgen Klopp. 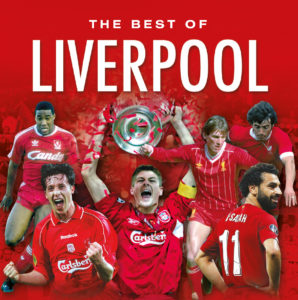