The Lake District was, until the 19th century, a remote, neglected and inaccessible part of England. Before the arrival of good road and rail networks and tourism it had been home to successive generations of very tough people: prehistoric peasant farmers, small Roman garrisons, Norse and Saxon settlers, monastic tenants and, after the Dissolution of the monasteries, the doughty farming families of yeomen or ‘statesmen’ and communities of miners and quarry workers. Each group has left its powerful imprint on the landscape and there is an exceptional legacy of prehistoric and Roman monuments, interesting medieval castles and monastic buildings and a wealth of post-medieval buildings in stone, as well as plenty of relics to attract the industrial archaeology enthusiasts. It is fitting that the Lake District should be the subject of one of the four volumes in the National Trust Histories series since the charity manages so man! y properties in the region and has done so much to conserve its beauty. There are scores of books which delight in the loveliness of the Lake District but very few which tell the visitor in uncomplicated terms about the creation of the landscape. There are also very few scholars who understood this story as well as celebrated Cambridge University historian Chris Barringer (who died, aged 83, in 2013) and his account will add a new dimension to the pleasure and inspiration that so many derive from this remarkable north-west corner of England. 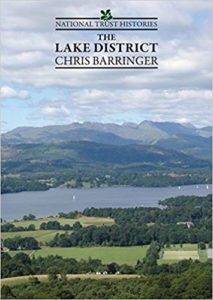