Betjeman – The Little Book of

The Little Book of Betjeman is a perceptive evocation of the late Poet Laureate’s life and work. The book is lavishly illustrated throughout, in both colour and black and white, with some hitherto unpublished pictures of the poet and many very rate first editions from the author’s personal collection. Author Peter Gammond knew John Betjeman and the members of his circle of friends at Oxford, such as Maurice Bowra, and, as Vice-Chairman and a former Chairman of The Betjeman Society, he is uniquely qualified to write about Britain’s best-loved poet of the 20th century. The poet was back in the news in August 2014 as his daughter, Candida Lycett-Green – a regular contributor to The Oldie magazine – passed away after a long battle with cancer. 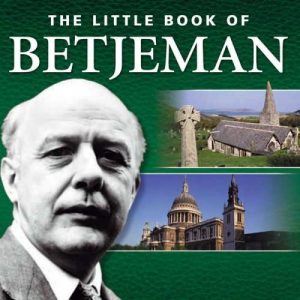