Despite a tragically early death while leading a 125cc motor cycle race in 2000,  the Northern Irish rider is still a legend at the TT where he won three hat-tricks and holds the record for 26 wins. This image captures an era and an ethos that’s rapidly fading. The fans sit on the hedge watching in awe as the most successful TT rider of all time hustles the 125cc Honda through in his seemingly effortless way. It is a great reminder of the prowess of Joey that in his final TT appearance, at the age of 47, he recorded his fastest ever lap.This iconic t-shirt features an officially licensed image from Duke Marketing who handle the official TT Races web-site. 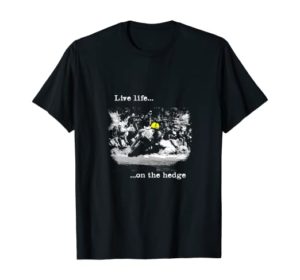