Who Parched Is – T-Shirt

The identity of the infamous Parched – the mystery colleague of England international Peter Crouch who became a cult figure on the That Peter Crouch podcast – is finally revealed on this iconic t-shirt. After months of speculation, Crouch outed his former Stoke City team-mate Charlie Adam as the player coined with the nickname after he would skip drinks breaks and suck up to his managers to talk tactics. Designed by Alex Young, of cre81ive. 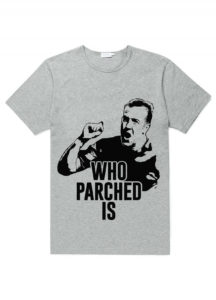