Last Night a DJ Saved My Life is a song written by Michael Cleveland for American one hit wonders Indeed. It features vocals from Réjane “Reggie” Magloire and Rose Marie Ramsey and was released as a single in 1982 peaking at No 13 in the UK charts.

Rolling Stone magazine declared the song “one of the greatest songs ever written about being a girl, listening to the radio, or any combination of the two .”

Michael Wylie’s hand-drawn typography t-shirt sparks memories of good times. The style of the artwork is inspired by the energy and emotion that music evokes. 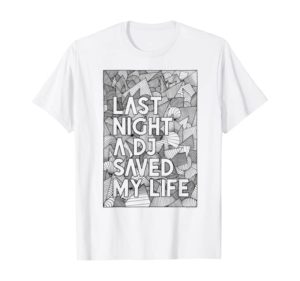