Indian Summer – The Story of the Cricket World Cup 1983 DVD

INDIAN SUMMER is a landmark documentary marking the 25th anniversary of a defining moment in cricket history. It’s a chronicle of no-hopers India causing the greatest upset in the annals of the World Cup. It’s a story of the 1983 World Cup in which India beat the then unbeatable West Indies in the final to lift the Prudential Cup after defeating England in the semi-final. It’s a tale of India’s transformation from their struggles in previous World Cups and appearances at Lords to making their intentions clear from the outset by eclipsing the West Indies and Australia once each in the preliminary stage and Zimbabwe twice the second time by virtue of a memorable innings in World Cup competition by captain Kapil Dev at Tunbridge Wells. 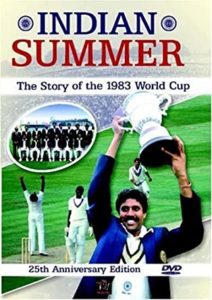