Gazza – Daft As A Brush? T-Shirt

Paul Gascoigne – best known as Gazza – was widely recognised as the most talented English footballer of his generation. He played for Newcastle, Spurs, Lazio and Rangers and won more than 50 caps for England.

Designed by caricaturist John Ireland, this iconic front cover is from Paul Gascoigne’s lighthearted look at his life as a professional footballer while playing for Tottenham Hotspur Football Club at the height of his fame in the late 1980s. The description of him was coined by Sir Bobby Robson, his manager at England and mentor at Newcastle.

“In my commentating career Paul Gascoigne was the best English player I ever saw. The way he could go past people, his upper body strength, he had the lot. ” – Former BBC football commentator John Motson. 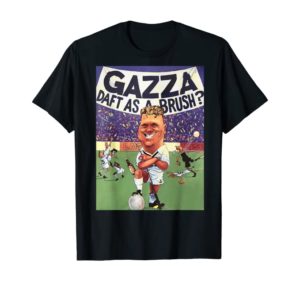 Be the first to review “Gazza – Daft As A Brush? T-Shirt” Cancel reply