New photography ebook helps to save lions from extinction 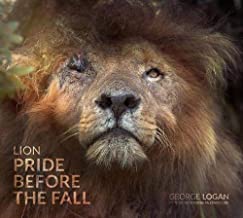 Acclaimed wildlife photographer George Logan has launched a new ebook of stunning wildlife photography to support and raise awareness for Africa’s dwindling’s lion population.  The fully illustrated book, entitled ‘Lion: Pride Before The Fall’, contains a collection of the London-based photographer’s beautiful and thought-provoking images of lions in the wild in Africa. The photographs, which celebrate the lifecycle of the lion in all of its raw beauty, serve as a stark reminder of what we stand to lose – with fewer than 20,000 African lions left, time is running out to safeguard their future.

George and The Born Free Foundation raised the money to publish the book through a hugely successful Kickstarter campaign which totalled £78,000 to fund the print run, production costs and distribution. The foreword to the book was written by Born Free founder and actress, Virginia McKenna OBE. She said: “No one, in my view, more strikingly has caught the multiple dimensions of lions’ behaviour and depth of character than George Logan. He has an unfailing sensitivity and admiration for the individual animal. This, for me, shines through each page of the book and is deeply moving in so many ways.”

George Logan said: “This work, the culmination of over 10 years following and photographing Africa’s lion prides, brings their dramatic narrative to life. It’s difficult to articulate the depths of what we stand to lose, but I hope that through this book, the lions will help tell that story. All profits from this book will raise vital funds to support, protect and help re-establish the *Last Lions of Meru, a major conservation initiative in Kenya, which works to protect and increase the lion population there, which currently stands at just 60-80 lions. Uniquely for a wildlife book, we’ve collaborated with some of the best creative minds at London’s top agencies to produce powerful imagery which confronts and highlights the dangers that the last remaining lions still face, such as habitat-loss, canned hunting, trophy hunting, human-wildlife conflict and the real possibility of extinction. These images will spearhead campaigns to raise awareness and accompany the book launch.”

The digital edition, priced at £9.99, will be available through Amazon Kindle and other worldwide platforms from October 31.