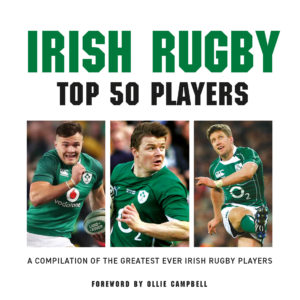 Tieing in with Ireland’s Autumn Internationals against Wales and England this month is a must-have new gift book for Irish rugby fans celebrating the greatest ever players to have played for the national team.

There is also a hefty selection of modern-day players including Keith Earls, Tadhg Furlong, Cian Healy, Rob Kearney, Conor Murray, Peter O’Mahoney and the new whizkid winger Jacob Stockdale. While there is also space for the great characters of the game, none more so than Peter ‘The Claw’ Clohessy, Willie Duggan and Moss Keane, who didn’t win the most caps but were fans’ favourites because of the spirit in which they played.

The Ireland national team celebrates its 145 anniversary this year having played its first international match against England in 1875. Ireland reached number 1 in the world rankings for the first time in 2019.