The History of Tanks – Ebook 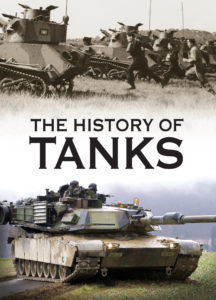 The tank was born to break the deadlock of World War Iâ€™s Western Front, where trench-based defence in depth, barbed wire, machine guns and artillery, led to immense loss of life. Initially dogged by mechanical unreliability and early misuse, post-First World War development of technology and tactics saw the Germans open World War II with the devastating Blitzkrieg in which armoured divisions led the way. Tanks dominated the battlefieldsâ€™ of World War II and have continued to develop, reaching their peak with the so called â€œMain battle tanksâ€: of the biggest military-industrial complexes: the US Abrams, German Leopard, British Challenger, Israeli Merkava and Russian T90.Today, in a world of asymmetric warfare, tanks may dominate the battlefield, but infantry rocket weapons and anti-tank helicopters have evened things up and ensure that tanks must develop further to meet changing threats. In The History of Tanks about the changing face of tank warfare through the 50 most important, iconic vehicles from 1914 to today.