The National Football League will celebrate its 100th season as a conglomerate, an all-encompassing behemoth that dominates the United States and, increasingly, the wider world. It is, by a reasonable margin, the most lucrative sports league on the planet. Even as some forecast the league’s demise due to the ongoing debates surrounding concussions and anthem protests, more people are watching its games in America than anything else. Each year, NFL games dominate the list of the most-watched shows in the US – and this one has been no different so far. Against this backdrop, the league is also making considerable gains internationally. The International Series has been heading to London since 2007, with four fixtures in the 2019 season set to bring the running total on these shores to 27 – while there have also been two in Mexico. Such incredible returns have helped turn the NFL into a remarkable feat of capitalism. The Carolina Panthers, far from the most sought-after of the 32 teams, were bought by David Tepper in 2018 for an incredible $2.2billion, while TV revenues continue to rise to a level all other organisations can only dream of. But how did an operation first developed at a car dealership in the tiny Ohio town of Canton become the dominant Pop Culture entity in US society? In Peter Murray’s A Complete History, he charts the NFL’s journey from humble beginnings to the unquestioned position as America’s Game. 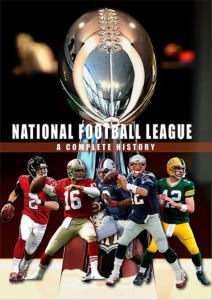