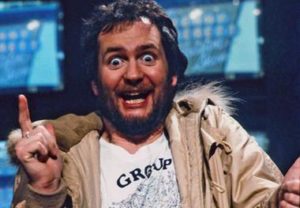 Kenny Everett’s hilarious autobiography, The Custard Stops at Hatfield is being re-released by G2 (in partnership with Lennard Associates) as a Retro Classic to tie-in with the 25th anniversary of his death at the age of 50 in April 1995. The £12.99 paperback takes you back on the journey of his life and career flavoured throughout with his wacky humour and personality.

Superstar deejays Chris Evans and Steve Wright have all cited Kenny as a huge influence – even the Goons’ creator Spike Milligan called him a genius. Kenny’s madcap style has become a blueprint for modern day radio shows with music, jingles, jokes and sound effects all part of the mix. He seamlessly moved into television in the 1970s where characters such as Cupid Stunt and Sid Snot became national treasures.