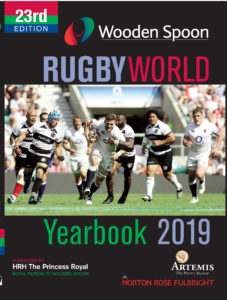 Tying in with the Six Nations Rugby Internationals is the release of the 23rd edition of the Wooden Spoon Rugby World Yearbook 2019. With a foreword by HRH Princess Royal, many of the country’s leading rugby writers reflect on the happenings of the past season and look ahead to what is in store this year including the World Cup in Japan. All aspects of rugby – club, internationals, women’s, sevens, youth – are all covered in a book which celebrates winners around the world and also tackles some of the issues that rugby faces as it continues to attract larger audiences both at the grounds and on television. Edited by legendary BBC Rugby Correspondent Ian Robertson, the £20 hardback is also available as an Ebook via this web-site.