WHO NEEDS CANTONA WHEN WE’VE GOT DICKIE ORD!

When a Manchester United team featuring one of the game’s most recognisable characters visited an ageing Roker Park in January 1996 for an FA Cup replay, the hosts Sunderland AFC were playing in the second tier of English football; a sleeping giant only just starting to stir following the arrival of Peter Reid as manager. Playing his part in the revival was Richard Ord, Dickie to his mates, at that time the club’s longest serving player and a former target of the boo boys. A Sunderland fan growing up, as a player he witnessed first-hand some of the most turbulent years in the club and experienced plenty of personal ups and downs during that period too. A neat trick on Eric Cantona that night well and truly completed his own personal recovery, but his story was far from over… 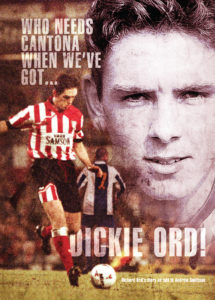 Be the first to review “WHO NEEDS CANTONA WHEN WE’VE GOT DICKIE ORD!” Cancel reply