The Custard Stops at Hatfield – by Kenny Everett

Kenny Everett was an iconic disc jockey and comedian best known for his irreverent, offbeat comedic style and bubbly personality.

After spells on pirate radio stations including Radio Luxembourg in the mid-1960s, he was one of the initial group of disc jockeys to join BBC’s newly created Radio One in 1967.

It was here on his regular show that he developed his trademark voices and surreal characters which he later adapted for television.

Everett was dismissed from the BBC in 1970 after making remarks about a government minister’s wife. He returned to commercial radio when it became licensed in the UK and joined Capital Radio.

He naturally evolved into television in the late 1970s where he made numerous comedy series on ITV and BBC.

Everett was a highly versatile performer, able to write his own scripts, compose jingles and operate advanced recording and mixing equipment. 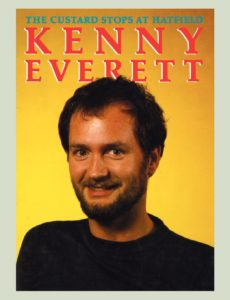