Early in the 20th century, geographers devoted a lot of time attempting to draw boundaries around geographical regions. Their failure was a reminder of the impossibility of drawing sharp lines around areas which gradually merge into their neighbours. Mid Anglia comprises the new counties of Bedfordshire, Cambridgeshire and Northamptonshire; its prosperous acres also broadly correspond to those occupied by the ancient Saxon kingdom of the Middle Angles. As such, the region contains the best assemblage of Saxon churches in England; the college buildings of Cambridge; and many fine post-medieval buildings such as Wimpole Hall and Kirby Hall. Author Christopher Taylor, the eminent landscape historian, has written a fascinating account of Mid Anglia’s formation and growth since prehistoric times. This volume is one of a series of four National Trust Histories which seeks to illuminate the landscapes of today by looking at the natural and human influences which have forged their distinctive characters. 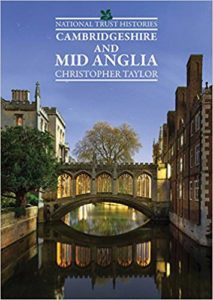