Football Grounds A Fans Guide is essential reading for supporters following their team away from home during the forthcoming 2019/20 season. Covering all 92 football grounds of the English Premier and Football Leagues as well as the 24 teams from the National League and Wembley Stadium, home to international matches, league play-offs and various cup finals – it is filled with useful information and tips for the travelling supporter. Not only are there practical details such as directions to the grounds by road and rail but it also includes other guidelines to make the fans’ day more enjoyable including a list of pubs that away fans normally frequent. The book is illustrated throughout with colour images of all the 117 grounds including the new Tottenham Hotspur Stadium (featured on the front cover) which hosted its first matches in Spring 2019. Author Duncan Adams is a Birmingham City Supporter and member of the exclusive 92 Club having travelled some 28,000 miles to visit every Premier and Football League ground to watch a competitive match as well as all of the National League grounds. 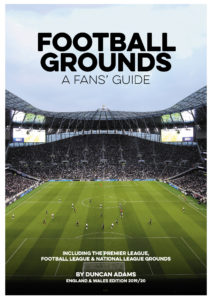