Jamie B. Edwards has spent more than a dozen years travelling many thousands of miles to draw every single Premier and Football League ground in the country which have been collected in this luxury hardback edition. From Accrington Stanley’s Wham Stadium to Yeovil Town’s Huish Park, with a couple of diversions to Wembley Stadium and the new London Stadium, Jamie has drawn the stadiums that have become second homes to generations of football fans. His drawings are redolent in colour, often tinted with the traditional hues of the home team, and have an inimitable graphic feel that celebrates not only the buildings but the settings in which they exist. He is arguably the most famous football stadium artist in the world and his pictures have sold in their thousands, with commissions from The FA, UEFA and top football clubs worldwide. For the first time, his life’s work has been carefully compiled in a stunning volume that not only includes his unique drawings but also brief written descriptions of all the stadiums with quotes from celebrity fans and ex-players. The foreword was written by Mark Chapman, presenter of BBC’s Match of the Day 2. 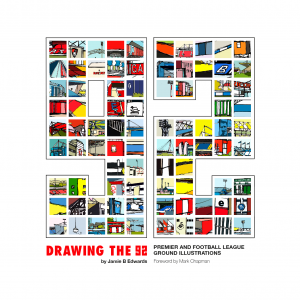 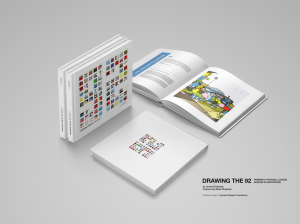 Signed and numbered by artist Jamie B Edwards, a limited casebound edition of 92 copies of his Drawing the 92 collection is available at £50 each including P&P.