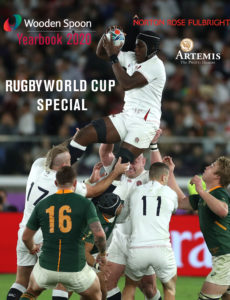 The Rugby World Cup dominated 2019 and this 24th edition of the Wooden Spoon Rugby World Yearbook is the story of the build-up to the World Cup and a full report of the tournament from Japan’s opening match against Russia to South Africa’s dominant performance against England in the final. The highlights are remembered in the words of some of the leading rugby journalists with pictures from the sport’s top photographers – Uruguay beating Fiji, Wales’s win over Australia, Japan delighting the home fans with wins over Ireland and Scotland and of course, England’s sensational semi-final win against the All Blacks. South Africa’s success, the performance of their team and the leadership of their captain Siya Kolisi are now written into the history books but RWC 2019 will also be remembered for the way in which the Japanese nation took rugby to its heart and gave both players and supporters the time of their life during six fantastic weeks of competition. Wooden Spoon Rugby World Yearbook 2020 is a colourful record of a memorable year of rugby that has been enjoyed by fans not only in Japan but in clubs, bars and sitting rooms around the world.