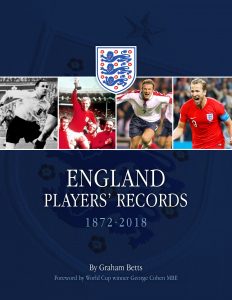 G2 is releasing an EBook version of its new and updated England Players’ Records 1872-2018 with a foreword by 1966 World Cup Winner George Cohen. The 1777-page book is a comprehensive illustrated record of every player to have ever played for England including special features on the nine centurions and our heroic World Cup squad. Compiled by Graham Betts, the leading expert on England’s football team and author of more than 20 sports and music books, the players’ ‘bible’ features 1235 entries including updated career details for all the squad players who took part in the FIFA World Cup in Russia this July under new manager Gareth Southgate.