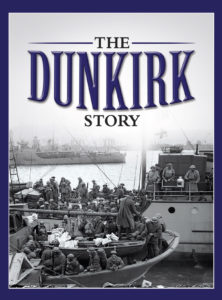 At just before 7pm on May 26th 1940 Prime Minister Winston Churchill authorised ‘Operation Dynamo’ to commence. By the time the operation came to an end on the night of June 4th, a total of 338,226 Belgian, French and British soldiers had been rescued by a hastily assembled fleet of over 800 boats.

Getting the men back required the courage of the Royal Navy sailors who took the majority of the outer harbour wall while under constant serial bombardment. But, it was the role played by the fleet of small vessels, the ‘little ships’, crewed by civilians, plucking men off the beaches as they waited in water up to their necks that overnight became part of the national folklore.

This evocative ebook, written by acclaimed military film director Bruce Vigar, is being released to mark the 80th anniversary of the great escape. ” Even today as we face a national pandemic, the country’s leaders invoke the ‘Dunkirk Spirit’ to pull people through in difficult times. ”