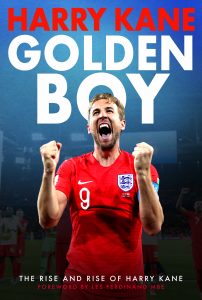 Written by journalist and Spurs fanatic Andy Greeves, with a foreword from club legend and coach ‘Sir’ Les Ferdinand MBE, the book takes a look back at the striker’s performances in England’s World Cup matches in Russia which included the first hat-trick at the tournament since 1986 and culminated in Harry Kane winning the Golden Boot Award.

The illustrated paperback also covers Kane’s formative years at Chingford Foundation School, his rejection at Spurs’ great North London rivals Arsenal and loan spells with the likes of Leyton Orient, Millwall, Norwich City and Leicester City prior to his emergence as leading light for club and country and a major contender for the 2018 Ballon d’Or.

As Kane prepares to lead Tottenham Hotspur into their brand new £850m, 62,000-seater stadium, the book also takes a look at his goal-packed seasons with the Lilywhites so far, that has seen him score more than 140 goals for the club including 113 Premier League strikes in just 158 matches. Having recently signed a new contact to keep him at the Tottenham Hotspur Stadium until 2024, Spurs supporters are looking forward to plenty more goals from a striker they class as “one of our own”.