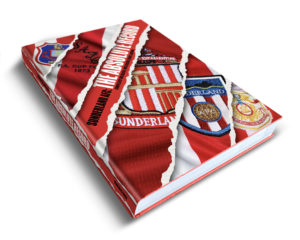 The Absolute Record is the most comprehensive history of Sunderland AFC ever produced and is due for official release by G2 Entertainment/Two Can on November 1. With 400 pages, it is filled with statistics and images up to the end of the 2019-20 season.

Written by Rob Mason, Mike Gibson and Barry Jackson – the same team who compiled, ‘Sunderland: The Complete Record’  – and with forewords by Niall Quinn and Brendan O’Donnell, the great great grandson of club founder James Allan, it includes the discovery of a new player no-one ever knew had played in the league for Sunderland. It also explains how the club’s all-time record league scorer Charlie Buchan should have been credited with an extra goal.